The word ‘touristy’ usually has negative connotations.  The good old google dictionary says that it is ‘often used to suggest tawdriness or lack of authenticity’. However, sometimes touristy isn’t so bad and just means you’re amongst like minded people wanting to see what many have seen before!  We are travelling a well trodden path in South America, we are not discovering new lands and there are some things and places that need to be seen to be believed and this has been particularly true in Bolivia.

In La Paz there are copious tours that you can sign up to but actually a number of these activities can be found quite easily without the escort. The first that falls into this category is Valle de la Luna, circa 10km from La Paz – a trip to the end of the line in the green cable car, a short walk round the corner to the park where you can pick up a collectivo heading to Mallasa that will drop you at the entrance to the park. It is super cheap to get in, 30 bolivianos and a strange and interesting place where unusual rock erosion and formations in the mountain have created a moon-like environment.  I wouldn’t say that this is a destination to change your plans for, or a major highlight of La Paz but it is definitely worth a look and very different from your typical mountain walk. There are two routes, one that takes 45 mins and the other 15, we did them both and then had chance to grab some lunch in the local town before heading back to La Paz. 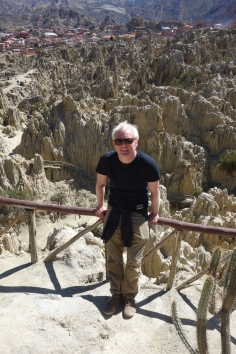 The second total tourist experience is the Cholita wrestling. Completely and totally random, directed at both tourists (Thursday nights are predominantly tourist) and locals (Sunday nights). We would have preferred to watch it with the locals for the atmosphere but we managed to squeeze it in the Thursday night that we took the night bus out of La Paz.

To find the wrestling venue we ventured to El Alto on the red cable car and walked through the Thursday night market. This was an adventure in itself as there was nothing that you could not buy. From apples to Cholita hats, to car parts to cameras (that had probably been removed from unsuspecting tourists earlier in the day) it went on for miles.

For 50 bolivianos each we got a ring side seat, a drink, some popcorn and ‘a souvenir’. The venue was a large sports hall, with a wrestling ring in the middle and chairs along three sides. The top end was a portable curtain and from behind that after much hype and introduction came the wrestlers.  I have never been to a wrestling match before and only seen clips of WWF (or WWE as it now is) which I would say this was loosely based on. However, I was sucked in within seconds and despite knowing that it is fundamentally rehearsed and the under dog is always going to win, I was ‘ooing ‘and ‘ahhing’ with the best of them as the Cholita ladies threw each other across (and out of) the ring. When the referees got involved and started siding with the ‘baddy’, body slamming our plaited heroine to the ground, I was up on my feet booing and shouting like it was my own mother under attack. (To be fair if that was the case I might have been slightly more proactive than just booing). It was one big piece of theatre and I loved it. 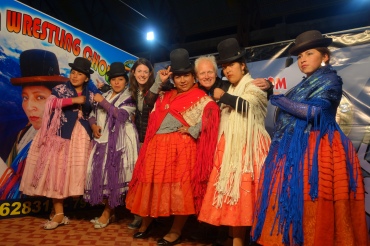 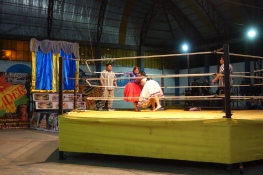 We hot footed it from the Cholita wrestling to the bus station where we boarded a night bus to Uyuni and the salt flats of Bolivia. This is without a doubt a tourist destination but equally one that should absolutely not be missed.  Our original cunning plan of getting to Uyuni from Chile had been thwarted with the snow in the Atacama desert a few weeks back which was why we were attacking it from La Paz. This is a destination where a tour is essential and there are a choice of 1-3 day trips. In order to maximise our time and reduce the need for additional accommodation we decided to do a one day trip arriving on the night bus and and returning to La Paz on the night bus that night. Also the three day trips headed down to the Chilean boarder and much of the time was spent on the bus which we felt was somewhat repetitive!

Our bus arrived in the town of Uyuni at 5am in the morning where it was bloody cold at -8 degrees. We were met off the bus by a frenzy of tour guides and over the course of the next hour the research that Jamie had done into the best tour went out of the window as we chose to succumb to a very determined guy that kept re-appearing at every turn. It turned out to be a good decision as it was a fairly new company called Jukil and they could not have done enough to help us.

After meeting the other members of our group from France, Norway and Tunisia we set off on our day of adventure, beginning bizarrely with a train cemetery. This is literally a collection of trains from the turn of the 20th century that have been left to rust in the salty airs following the collapse of the local mining industry. These days it serves as a playground for grown ups with tourists climbing all over the shells of the old trains. It was weird but when in Uyuni… 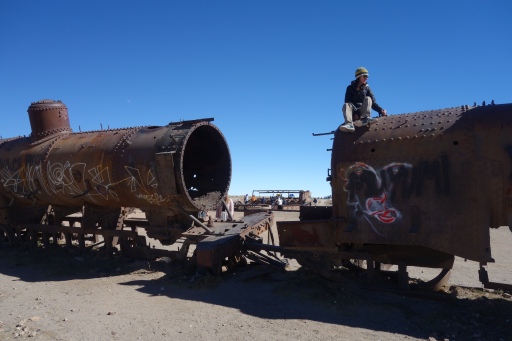 After the odd interlude on the train tracks we were driven out in our jeep to the world’s largest salt flat, circa 4,000 sq miles of salt. This phenomena really is a sight to behold with a 360 degree view of white, resembling snow, which really confuses the brain when you step out onto hard salt. The salt flats were formed following the evaporation of pre-historic lakes leaving a meter thick crust of salt. As well as being a veritable tourist destination, it also has its practical uses for science, food and manufacturing. We found piles of salt resembling small pyramids that had been gathered by locals and left to dry. This would then be collected and taken for processing where they add iodine and turn it into table salt. Underneath the salt is approximately half the world’s reserve of lithium that can be used in manufacturing batteries and that is also in the process of being extracted. Finally the most interesting use for Uyuni is by NASA who calibrate their satellites from the flat expanse of salt desert.

We spent the day being driven to different parts of the flats each with a different photo opportunity. At certain times of the year, water gathers on the salt creating perfect reflections of the surrounding mountains or tourists… 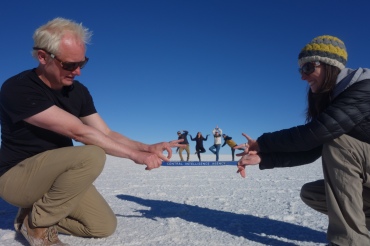 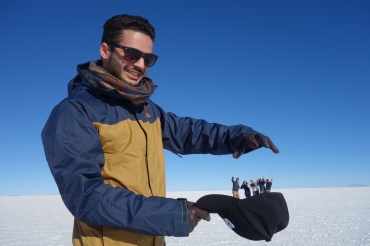 We had our group packed lunch in the circular dining room of the salt hotel which conveniently happens to be located in the middle of the salt flats, (anyone would think they saw tourists coming…) Then to continue the randomness we visited Isla Incahuasi (Cactus Island) which as the name suggests was an island full of cactus offering great views of the salt flats. 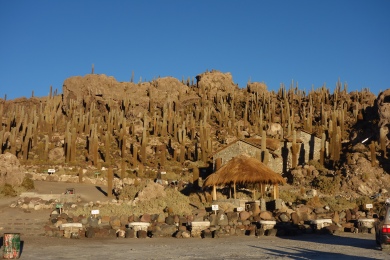 We finished the day with an amazing sun set – some power ballads blaring from our tour guide’s jeep to add some romance to the occasion. When the sun was well and truly in bed we stopped again for some star gazing, a fantastic sight with the whole sky ablaze with twinkles. As luck would have it one of our group happened to be an astro-physicist who could not only point out but explain where we were in the milky-way. I’m not even going to try and replicate that explanation! 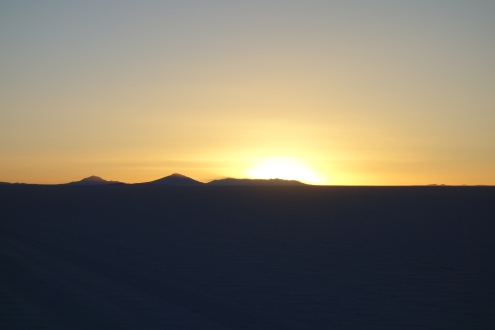 One thought on “Being touristy in Bolivia”