Easter Island had always been on the agenda when we talked about South America but once we had begun travelling we wondered whether the cost of getting there may stop us in our tracks. However, after some debate we decided that we were never likely to be so ‘close’ again and so we carpe diemed it right up and booked the flights. GOOD DECISION!

Firstly because by strange and apparently not uncommon luck the business class flights were cheaper than economy at the time we booked them. This was our first (and in all honesty probably last) experience of flying business and after a day of travelling on a bus a full bed for a 6 hour night flight was very much appreciated! 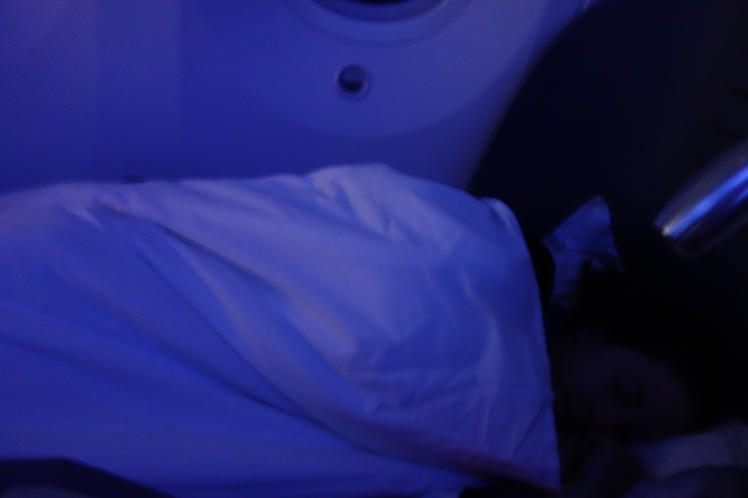 We were woken up for the descent into the Easter Island airport and looking out of the window I thought the pilot had made a mistake. There was still nothing but ocean beneath us and no glimpse of land at all. However, he was confident in his decision and just at the point of us landing in the drink, a runway appeared and Easter Island presented itself. It was surprisingly green with fields of cows peering at us looking not that dissimilar to the British Isles.

The airport is smaller than Newquay and it doesn’t look like an airport. The staff are dressed in Hawaiian shirts and shorts and on exiting the building/room we were met by our hostel driver and presented with a lei. At this point it was 24 degrees, the sun was shining and I literally could not have been happier!

Easter Island is 163.4km² sq ft (The Isle of Wight is 380km²) and 2,182 miles from the nearest land mass which is Concepcion in Chile. There are flights from Santiago daily and one flight a week from Tahiti. It is the most remote inhabited island in the world with circa 5,700 inhabitants and known for the circa 900 Moai monuments that were established between 1400-1650 BC by the local Rapa Nui (Easter Island inhabitants). The biggest question around these monuments is how the bloody hell they got to their current location… and why.

At the time the monuments were constructed the island had inhabitants of circa 1500 people within different tribes.  The fact that the monuments are found across the island suggests that different tribes subscribed to the same belief when establishing the Moai. Each of the circa 900 monuments faces in land bar one which faces the sea.  The questions continue as to why they were built, why they faced the way they did and what they were for. There are suggestions around whether they represented ancestors that were treated like Gods but no one really knows. What is known is that they are sacred and incredibly important to the islanders. 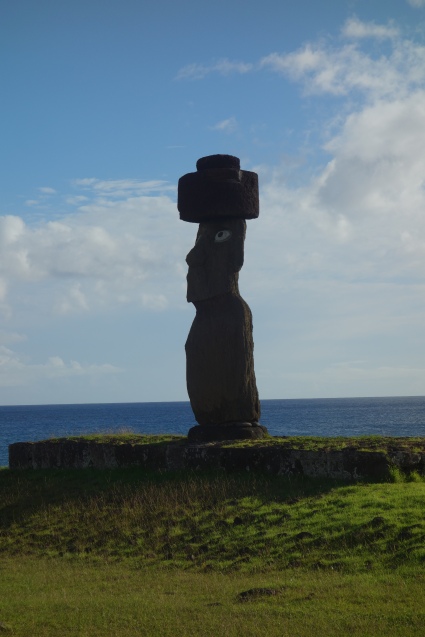 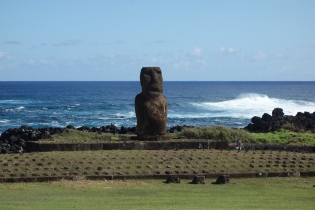 Easter Island is truly beautiful. We hired a car and went round the island to the different Moai sites. The most fascinating was the birth place of the Moai which was an extinct volcano where the stone for all of the statues on the island was taken. Not only could you see where they had been carved out but there were some still some that had been left in working progress set into the volcano and others that had been positioned around the site. Seeing these made it even clearer what a massive feat it must have been not only to carve them out in the first place but also to transport them across the island.

Further up the coast there was a beach called Anakena which is the island’s hidden gem. It is beautiful with crystal blue seas and of course a number of Mai overlooking incoming visitors. 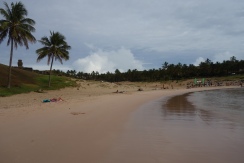 What we also learned about Easter Island is that although it ‘belongs’ to Chile, it has never really been accepted by the local tribes. The sign outside the government building states that they were not in agreement with the 1888 declaration by the Chilean government. Equally outside of what looked to be the island’s luxury hotel was a very clear protest regarding stolen land.  Having that said there didn’t seem to be any active conflict but it did appear to be an on going bone of contention. 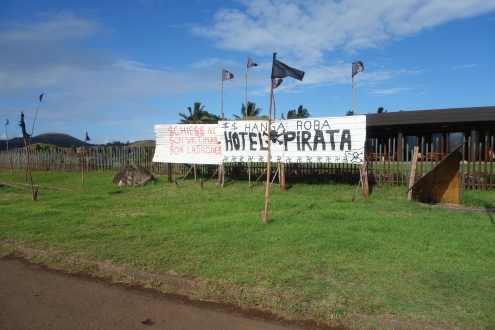 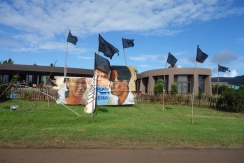 The stories connected with Easter Island across the ages are fascinating. We visited a huge crater left from an extinct volcano and instead of following the road like normal people decided to hike through bushes ripping our legs to pieces to find Orongo, the world heritage status ceremonial centre and origins of the bird man cult.

The Rapai Nui people (what the inhabitants of Easter Island were called) used to have an annual competition. A bird called the Sooty Tern used to lay its one egg on a small island off Easter Island annually and the competition was a ritual to  find the egg, swim back to Easter Island, climb the cliff to Orongo and the winner would be crowned the bird man. There was a lot more to it than that but just looking at the distance between the islet and Easter Island and the height of the climb makes me think that is a sufficient enough explanation – you can look the rest up! 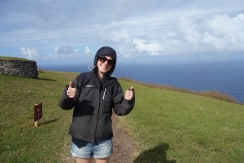 Easter Island is expensive, considerably more so than mainland Chile so the budget has gone out of the window and we’ll be eating beans on toast for the foreseeable future! The biggest expense is to get into the national parks. Another bone of contention between local island council and the Santiago government. Last year the cost was £36 per person. 2017 the price has gone up to £56 per person and is unavoidable if you want to see the island. What that money goes to is anyone’s guess as the sites themselves have seen better days in terms of signage and general infrastructure. Considering the millions received from these tickets every year you can see why the islanders are a pretty pissed off that they are not seeing much of it.

Having said that, Easter Island has been a real highlight. Before we came it was suggested to us that it was just a rock in the ocean and it has proved to be so much more. It is rich in unexplained history, natural beauty and a strong local community.  It is a long way from anywhere but it is worth the effort to get to and not something that is comparable to anywhere else that we have visited. Should you be passing, pay it a visit, it’s worth it!