We’re back on the road! Whoop! No time for gentle re-introductions we threw ourselves straight into São Paolo, the fifth (or third depending on who you speak to) biggest city in the world, the largest city in Brazil and indeed the Southern hemisphere with a population of over 12 million people.  And bloody hell.. it’s big!

Unlike some other cities, São Paolo does not present tourists with its jewels on a plate, you have to go and find them. Unfortunately, what is does give, without even trying is an insight into the class divide with copious skyscrapers and streets that model themselves on Fifth Avenue, New York whilst at the same having so many homeless vagrants, many without shoes or any single possession sleeping rough on the curb of a busy road. The story of São Paolo seems to be one of constant transformation and expansion that has swept everyone on its evolving journey one way or another.

The story of boom and bust is repeated often in the city and there are examples of huge buildings that were built at great expense but the money ran out before they were finished or after a few years of being open leaving them to sit vacant for years on end. The first skyscraper in Brazil was the Martinelli building, the construction started in 1922 and it was finally completed in 1934 with 30 floors. However, the owners went bankrupt and it was left empty for many years before being taken over by the government. 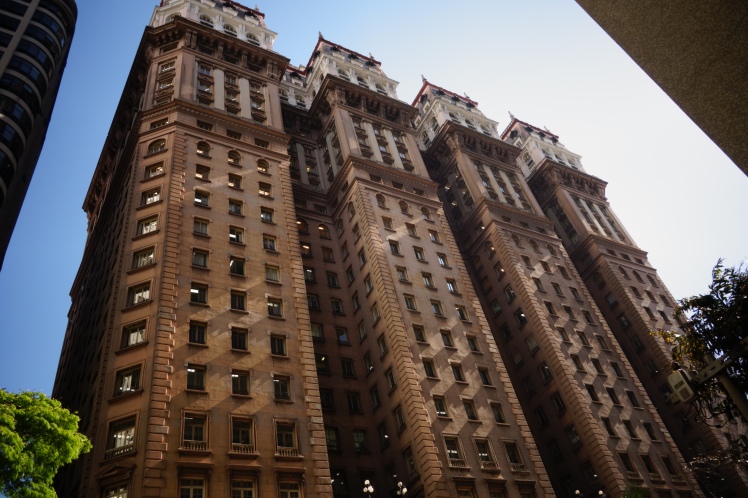 The 1920’s saw a fair amount of construction and there are some interesting art deco buildings still remaining. Unfortunately, São Paolo had the attitude out with the old and demolished the majority of old colonial buildings to make way for the modern skyscrapers. One of the buildings that used to be known as the highest building in São Paolo is no dwarfed by its two enormous skyscraper neighbours.

The best way of seeing the city is from above and there is no better place than at the top of the Edifício Italia, a 46 story skyscraper in the Republica district of the city (Republica metro station). For R$30 you can go the the viewing point outside the restaurant on the 42nd floor, and more importantly you get a glass of Prosecco to add to the view! From this height you get to walk around the outside and really get to appreciate the size of the city, it is pretty mind-blowing!

Next to the Edifício Italia is Edifício Copan, one of Brazil’s largest residential buildings. It was designed by the famous Brazilian architect Oscar Niemeyer and is shaped like a wave. It has 38 stories and 1,600 apartments and was completed in 1966, 14 years after it began. Since 2014 it has been covered by a huge drape to stop parts of the building falling on peoples heads… 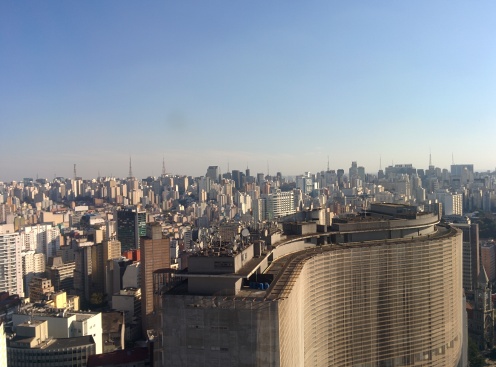 Oscar Niemeyer was famous for his interesting buildings and love of curves and angles. He was the architect behind Brasilia, the capital city of Brazil which is apparently shaped like an aeroplane, and was also responsible for the buildings within Ibirapuera Park the one large expanse of green within São Paolo.

Feeling like the walls of the skyscrapers were pressing in on us we escaped for the afternoon to Ibirapuera (best to get to by taxi, Ana Rosa is the nearest metro station but not close). It is a peaceful park with a lake, running and cycling paths and the Niemeyer designed music hall. There were bands practising samba music in the park and a generally relaxed atmosphere, we even spotted a tortoise ambling across the road! 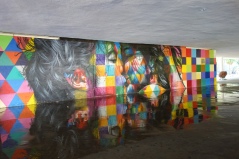 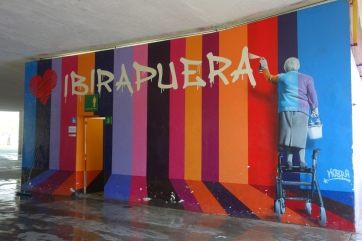 Another place worth a visit is MASP, the Museu de Arte de São Paulo, we went on a Tuesday and surprisingly it turned out to be the day it is free… Worth knowing! They have a collection of Brazilian and South American art and specific exhibitions featuring European painters including Monet, Raphael, Van Gogh and Picasso. (Nearest metro Trianon).

São Paolo is an easy enough city to navigate, the metro is a safe way of travelling and gets you to where you need to be. Taxis are not hugely expensive and you can use Uber which is all well and good until they cancel you at the last minute because of the traffic. Be warned the traffic is horrendous so always opt for the metro when possible and if you have somewhere to be at a specific time leave well in advance!

People in Rio describe São Paolo as the grey city because of the way that the graffiti in the city (and this is actual graffiti not street art) keeps being covered up with grey paint, the scale of the buildings and lack of sea. However, if you look closely enough you can see the colour. There is plenty to explore, eat, drink and view and is a city that despite having its issues, should still be more than a stop over.

With significant birthdays, weddings and christenings at an end in the UK we’re back on the road and with no time for a gentle re-intorduction we leapt straight into the fifth biggest city in the world. Sao Paolo. And bloody hell it’s big.