Lake Titicaca is the largest lake in South America and crosses both Bolivia and Peru. It is also still at high altitude at 3,810 meters above sea level. And yes, Jamie did giggle at its name…

It only took 3 hours to reach the lake from La Paz along some mountain roads with beautiful scenery. As soon as the lake came into view the pure scale of it was breath-taking and at some points it looked more like the sea. In order to get to our destination of Copacabana (not the Manilow one) we had to get off the bus at a small town called San Pedro Tiquina and watch it being shunted across the river whilst we boarded a small pedestrian boat. All a good adventure despite ours hosting the Pied Piper of Hamelin who insisted on summoning every sky rat in the world to swoop on our boat and potentially pluck out the eyes of anyone looking up. 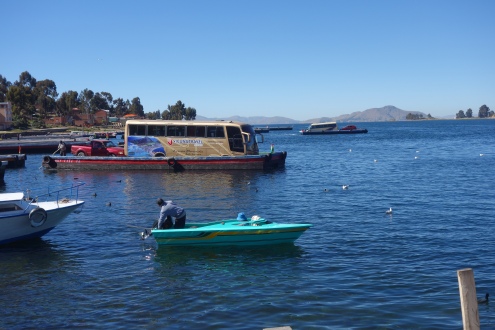 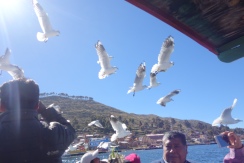 Returning gratefully to our bus with eyeballs firmly in place we continued on to Copacabana, a small lakeside town geared to host the many visitors they have arriving on a daily basis. There were a multitude of restaurants and bars – although I had made a terrible discovery in La Paz… I cannot drink alcoholic beverages at high altitude. I know. Shocking. A true travesty, but even two glasses of wine left me feeling like I’d drunk two bottles on an empty stomach and it was just not worth the pain. So I enjoyed the fruit juices and jars of homemade lemonade instead.

Like any good town there was a mirador which of course meant a sturdy hike up a hill. Again the pesky altitude did make me fear for my own fitness as I wheezed up the easiest of inclines like there was a huge bear sitting on my chest. However, once at the top the raisins in my rib cage transformed back into lungs and we enjoyed a fantastic sunset. 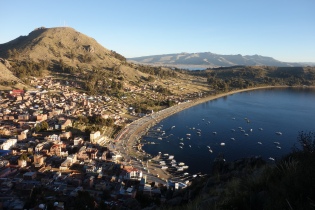 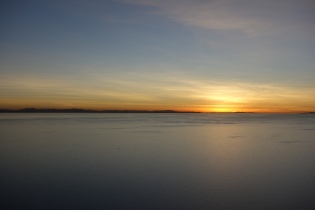 From the Bolivian side of Lake Titicaca you can get a boat trip to both Isla de la Luna and Isla del Sol. Isla de la Luna is the smaller of the islands with only around 80 permanent inhabitants.  In Inca mythology, Viracocha was the deity who was responsible for the creation of all things; legend has it that he ordered the moon to rise into the sky from this island. We visited the Inca Ruins of the Virgins of the Sun, where specially chosen Inca girls had been sent to live like nuns, dedicating their lives to worshipping the sun. People still leave offerings to the gods in the ruins of the temple and we saw money, bottles of wine, flowers and letters (although we didn’t read them obvs). The snow capped Andes mountains can also be seen from this small island which is a breath-taker every time!

Isla del Sol is the more frequently visited  of these two islands. It is larger with over 800 inhabitants and it is possible to stay there should you wish. It was thought that it was the home of the supreme Inca God Inti. It is a great island for hiking, there are no vehicles allowed and we passed a number of donkeys and llamas carrying bundles of wheat. There is more agriculture on the island and we saw a number of plots of land growing beans, and other vegetables. Isla del Sol is known for its Inca ruins and on the South side of the island we found the 206 Inca steps. (Well we didn’t exactly ‘find’ them, apparently archaeologists did that, we followed a sign post and there they were…) Near the steps is a sacred fountain rumoured to be a fountain of youth. Unfortunately I only found that out after we had left otherwise I would still be in it.

The sad thing about Isla del Sol at the moment (June 2017) is that the locals are in the middle of a big dispute. Although I can’t swear to the accuracy of this gossip (it came from our hostel manager) it appears that the fight is about money. The North side of the island is home to many of the Inca ruins and there seems to be disagreement about the distribution of the tourist dollar. This dispute has reached such a height that the North of the island slammed its doors on tourists and it is currently off limits.  The mood turned particularly dark when dynamite was found on the path (again quoting our quite dramatic hostel host). So the long and short of it is that we did not get to the North side of the island but enjoyed the hikes in the South and the views it had to offer. 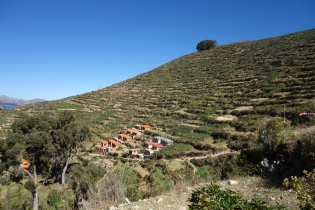 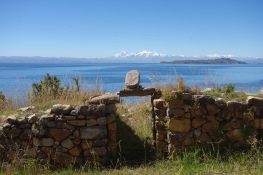 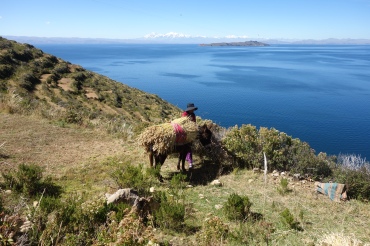 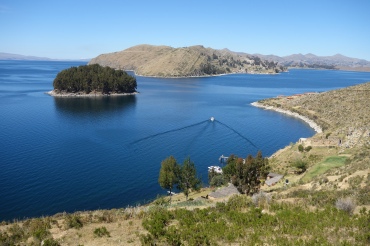 After a few days in Copacabana it was time to leave Bolivia and see Lake Titicaca from the Peruvian side. The border crossing with Peru was only about 20 mins from Copacabana and the easiest and warmest one yet with a quick duck into passport control for a stamp.

We continued on to the city of Puno for the sole purpose of visiting the floating islands on Lake Titicaca. The Islas Uros were somewhere I’d been keen on visiting as my sister had worked there through a World Challenge Expedition about 16 years ago building a school or something equally useful (at least one family member serves the greater good)!

Historically the Uros began living on  floating islands centuries ago as they were a small tribe needing to survive in an Inca dominated world and not having the man power to fight, chose isolation as the best means of defence. The islands are built from the tortora reeds found in the shallow part of the lake, layer upon layer up to about 3 meters thick. The houses are made of the same reeds, as are the beds and furniture and if that wasn’t multi-purpose enough they also eat them – I can confirm they taste like a mild celery. 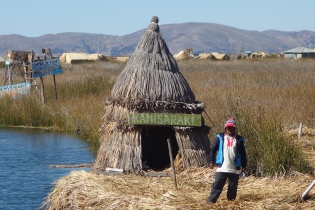 The Uro people replace their floors every 15 days and whole islands are completely rebuilt every 30 years or so. Circa 8 families live on each island and when it is cold often share the same room to sleep. The toilet is a boat ride away and rowing boats and motor boats are moored alongside the island. (I guess you pick the boat depending on the level of urgency). There are schools on sporadic islands and all islands are moored so they don’t float away when their inhabitants are not looking.

The way of life we witnessed is undoubtedly very different to anything else we have seen and in many ways like a journey back in time. The girls have children young, the lady we met was 19 and had a 2 year old already – so basically I’m old enough to be a grandmother…

About 80% of islanders are involved in some way in the tourist industry and different houses are used to welcome tourists at different times. We were shown to a house, taught about daily life and shown how they cook. They speak Kichwa and the ladies tried to teach us some phrases, although I’m not sure I will be fluent anytime soon!

The trip we took to the islands had pros and cons. It was informative and we learned some interesting things but we did feel a bit that we were on the tourist wheel being quickly shunted around and it was a bit awkward at times. The ladies we met were tourist savvy and we were treated to a song in Kichwa, one in Spanish and finally in English, ‘the wheels on the bus’. Considering they live on a floating reed island I’m not sure their hearts were in the last one. 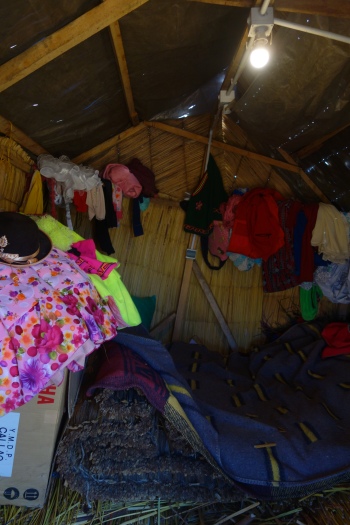 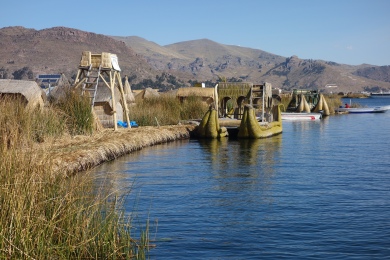 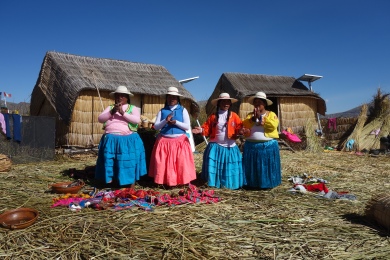 However, we bought the ‘artisan products not found anywhere else’  (except on every corner of Peru) and got involved in the slightly cringe worthy photo opportunities and despite not having the same authentic experience that my sis enjoyed did come away feeling that we had seen something quite different – and that’s what it’s all about after all.