Having taken quite a few long haul and night buses throughout South America I hadn’t been phased about leaving Rio on the night bus. That was until a fellow passenger stood up and asked the driver permission to pray for us all as we undertook the dangerous journey ahead. His prayer was pretty detailed and lengthy and was met by a fervent AMEN from every other passenger. At this point I did my seat-belt up that little bit tighter.

We arrived early in the morning in Vila Velha, a town just outside of Vittoria the capital of the state of Espírito Santo. On a Sunday, Vila Velha is not the most happening of places, despite its size and population of circa 400,000. The beach is a funny thing, looking forwards there is white sand, blue sea and palm trees but it has a backdrop of skyscrapers.

10 minutes outside Vila Velha is a small town called Barra do Juca, there are no sky scrapers to be seen and two beaches resembling Cornish fishing villages. There are a few bars and restaurants in the town and musicians playing on the beach. The locals flock here with their picnics and barbecues and there is a family atmosphere with people of all ages enjoying the sun.

However, the weather was soon to change. We moved on from Vila Velha to the tropical state of Bahia and Porto Seguro, one of the first towns built by the colonialists in Brazil. The first clue was in ‘tropical’ the second was how green and lush everything was. It was time to see our old friend rain again. We stayed across the water from Porto Seguro in the coastal town of Arraial d’Ajuda. The beaches are a big draw which is slightly unfortunate given that it was hammering down with rain. Instead we jumped on a local bus and headed out for the day to Trancoso, a historic fishing village founded in 1583 by the Jesuit priests. The main square of the village has been maintained with a 16th century Catholic church at the far end and coloured houses along the two sides, all of which are UNESCO sites. 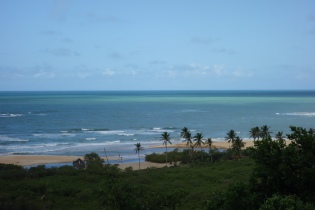 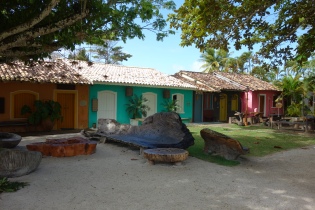 Trancoso is a favourite of celebrity photographer Mario Testino and the likes of Kate Moss, Naomi Campbell and Leonardo Dicaprio have all been known to frequent its bars and beaches so it has been known to host some very beautiful people. Then we arrived. Inexplicably no one wanted our picture… 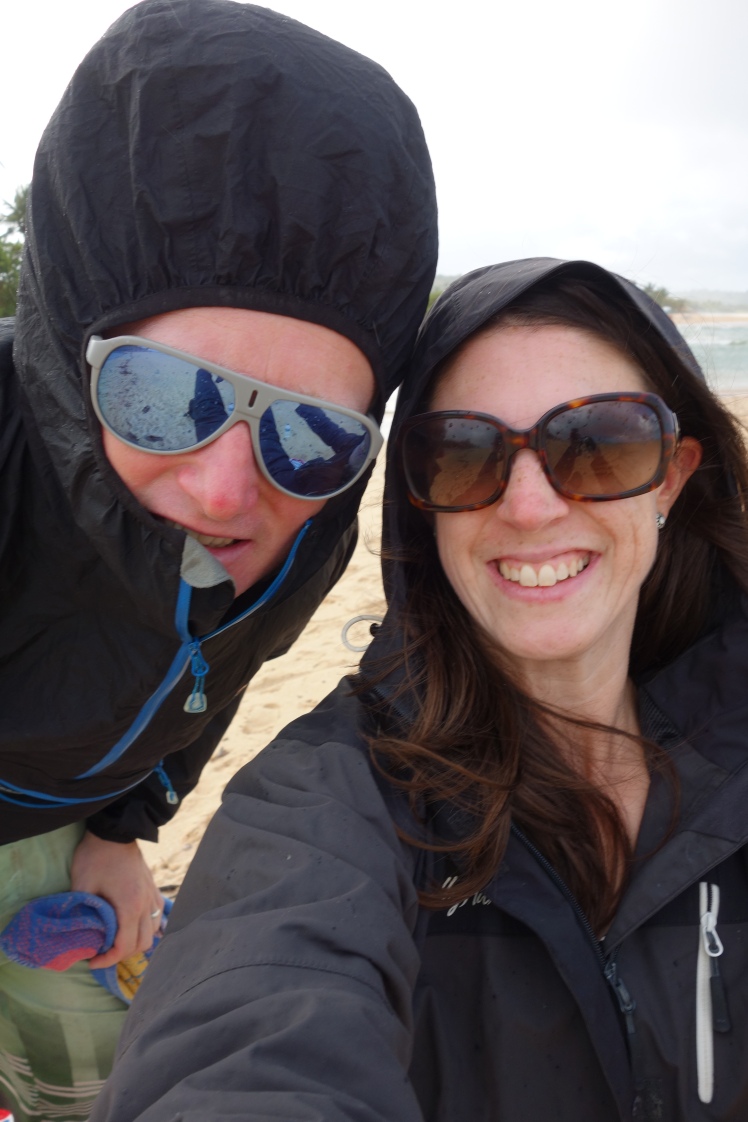 The weather did play fair in the end and gave us some sporadic hours of sun which we used to explore the beach.  We quickly discovered that the tide comes up pretty high in the afternoons and there is not much beach left. The mornings are the best bet or alternatively if you don’t mind some sprinting through the tide on the way back then work your way round to Pitinga beach where the red cliffs add to the beauty .

The town of Arraial d’Ajuda was busy despite the weather. There were boutique clothing stores, juice bars, restaurants and in the evening a band in the main square with crepe, tapioca and caipirinha stands. There are streets dedicated to food, some good restaurants, some with great live music, others not so much. In the day it is worth walking up to the view point at the end of the top square for the view of the sea, you will also find a wall covered in ribbons. These we have learned are synonymous with the Bahia region and are the ‘Bahia band’ each colour has some area of your life covered. For example, blue is for health, green for wealth, white for wisdom. The idea is you wear them until they fall apart and then make your wish. So chose your colour, make your wish and hope for the best!