So this it is. The final blog from South America. Time has flown but before we did we wanted to squeeze in one more country – Suriname. Now if you’re from the Netherlands you will know all about Suriname, what with it being an old Dutch colony and all. It is situated north of Brazil sandwiched between French Guiana and British Guiana and is the only country in South America where the main language is Dutch.

Suriname is not hugely well known in the UK and coupled with the fact it was a last minute wingingit decision to go there we arrived pretty clueless. So for a county well worth a visit here are some tips:

We did not come prepared and only had enough dollars for one person. This resulted in me having to surrender my passport and head the next day with the correct money in Euros to the government office in Parimaribo to collect it.

2. Should you have to surrender your passport, arrive at the government office before 12.00 as they then want to send you to the National Bank to pay the money in (which closes at midday). Having arrived after 12.00 we very nearly had to wait another day until the staff begrudgingly completed the form but made sure they took a good hour to do so. Still not finished we then had to walk to an additional office down the street to get the stamp in the passport. All avoidable had we had the right money in the first place!

3. The capital of Suriname is Paramaribo and any kind of travel around the country begins here. Independent travel is trickier here then other countries as everything is offered as a tour. However it is still possible and the Dutch owner of our B&B along was helpful at pointing us in the right direction with help from her Dutch guide book.

4. Tours are not cheap but if you do take them, it is possible to pay in Euros, dollars or Surinamese dollars.

5. If you’re looking for a beach holiday Suriname is not your place as it doesn’t have any beaches! The coast is predominately covered in mangrove so although there are sandbanks there are not your typical beach. What you will find is a wealth of rainforest to explore and rivers to swim in.

Parimaribo is not a huge city, but a culturally diverse one where a mosque and a synagogue sit side by side with a cathedral in the next road. Other than a large number of Dutch there are also big Chinese and African communities throughout the country. 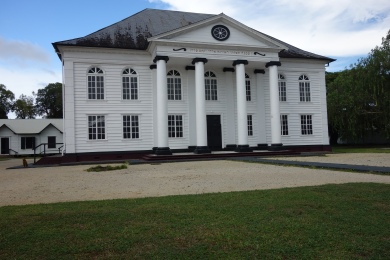 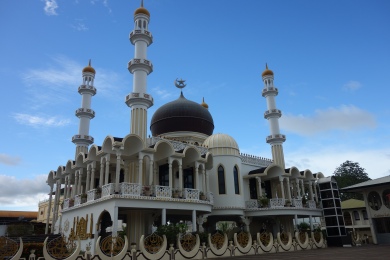 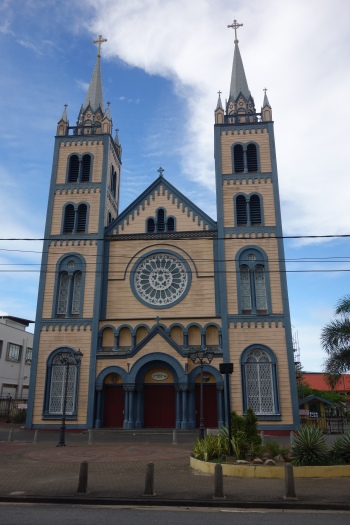 The buildings are preserved from colonial times and the city has been named a UNESCO world heritage site. 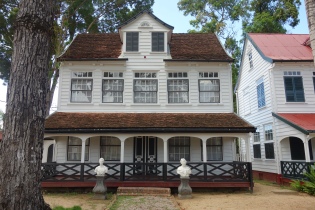 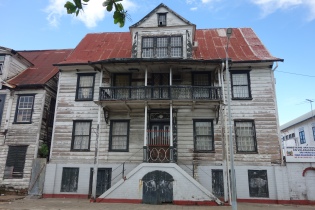 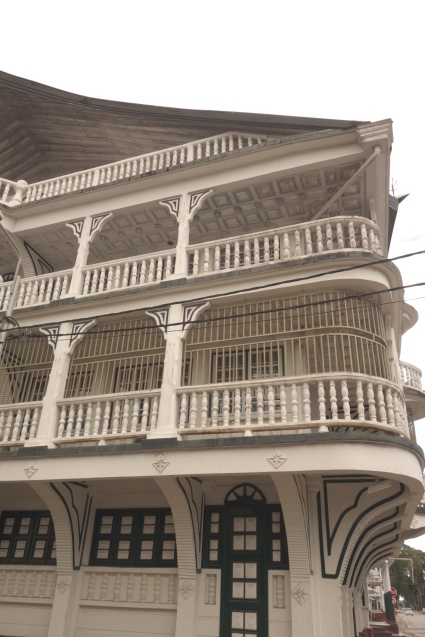 In true Dutch style we hired some bikes from a local hostel, Zus and Zo, and took a boat over to a former coffee and cacao plantation called Pepperpot to have a bit of a two wheeled exploration, finding ourselves amongst goats and a lot of hungry mosquitoes! You can return to Parimaribo via the bridge but having experienced the terrifying driving of motorists in the city we decided to take the boat back rather than take our lives in our hands! 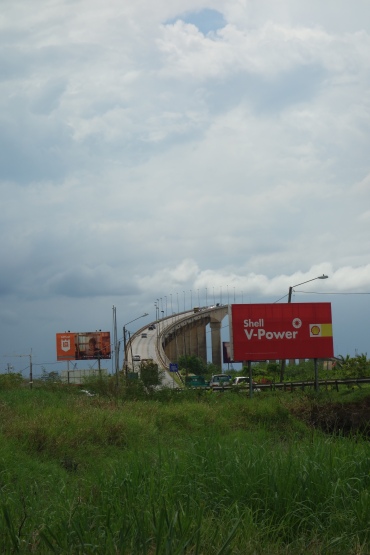 Another lovely experience in Parimaribo is to take a boat at sunset to watch for dolphins. This can be arranged through any booking agent in town and costs €27.50 per person and leaves from the jetty at Leonsberg. The trip lasts three hours includes drinks and snacks and we spotted pods of Surinamese dolphins flashing their pink tummies as they played in the waters alongside us. 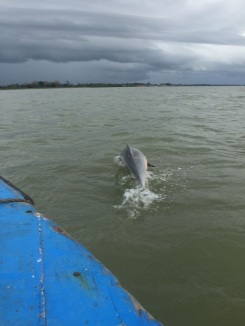 As the sun set and the dolphins finished playing, we visited another former plantation before heading back to the city. It was a great experience and phenomenal how close the dolphins were! The skies that night were also something to be seen, there was a thunderstorm going on over the city and the sky looked sensational. 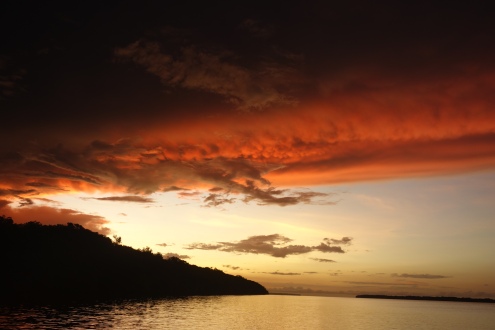 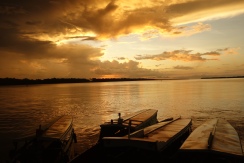 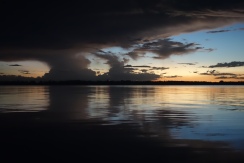 Wanting to see more of the country, the real highlight of our time in Suriname came with a trip to a village in upper Suriname called Gunsi, situated on a river and in the very heart of the rainforest. The population of the villages along this part of the river are predominantly the Maroon people, descendants of African slaves that escaped slavery, fleeing to the forests and setting up home, mixing with the indigenous Americans and  fortunately evading all future re-capture.

Having not wanted to take tour we were able to get to Gunsi by taking a minibus to the port and then going with a  local boatman who dropped us at the village. The whole journey took about four hours from Parimaribo and was an adventure in itself. Firstly the minibus is far from a direct journey, although we were the last people to be picked up we took three hours to reach the port as we stopped for the locals on the bus to do their shopping, get some lunch, drop off various bags of maize and generally run chores! On arriving at the port, it was chaos with people everywhere with all kinds of goods including electric hobs to take to their villages. The boats were like long dug out motorised canoes and being dry season at certain points in the river we had to climb out onto rocks in order for the boat to be light enough to continue over rapids before getting back in again to continue on our way. We were all part of the journey with children being passed to us to hold whilst their parents or grandparents re-took their seats. Then after a stopping at a number of villages on the way to drop off passengers, we reached Gunsi. 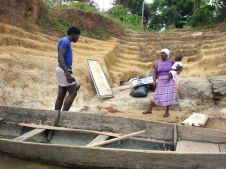 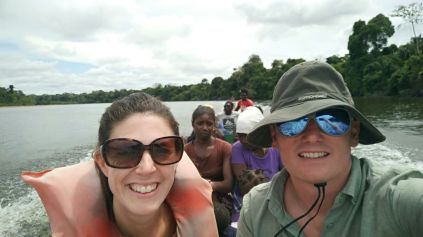 Gunsi is a brilliant place. We stayed at a lodge on the edge of the village that was run by locals. It is basic but clean and our hut consisted of just a bed with a mosquito net. From our balcony we looked across the river where we watched the fisherman in action and the river boats come and go. There was no phone reception or internet which was pretty rare and thoroughly welcome! (For me anyway, Jamie was a little more disconcerted)! 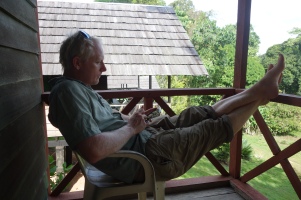 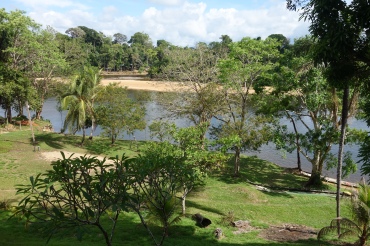 The people running Gunsi are great, we were left to our own devices to explore the village, swim in the river and meet the local people. The villagers do not like having their photo taken but they were happy to chat and we bought a wooden bowl from a bare breasted older lady who made her wares from carved out coconuts. We spent time with the hosts who explained the history of the Marron people and beat Jamie at checkers. My absolute favourite night was when the instruments were brought out and the singing began, not to the local music that I was expecting but to the likes of Adele and Rihanna and of course I was only happy to join in! Gunsi is a great experience, on one day we went swimming with our host over to the sand bank on the other side of the river. Whilst the boys swam about through the rapids I made my way back across and found a group of women doing their washing in the river. When I asked if I could help I was handed a saucepan, shown how to use sand to clean off the dirt and joined in with the scrubbing. Despite not understanding the language (they could well have been complaining about my scrubbing techniques) it was nice to be part of the group for that time.

I would have liked to have stayed longer at Gunsi, we met a lovely Dutch lady who was an artist and had set up permanent home there working with the local children and painting her artwork on some of the buildings. I could certainly see the attraction of being there longer term and would whole heatedly recommend Gunsi Eco resort to anyone wanting some peace and tranquillity and a totally different experience. It was great to end our adventure on such a high as it will be somewhere that we will remember forever. 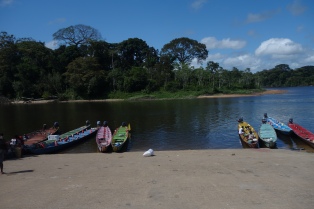 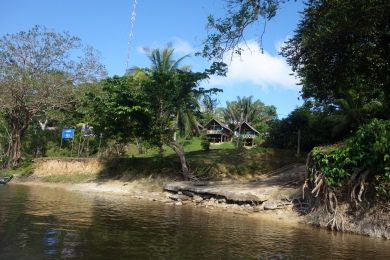 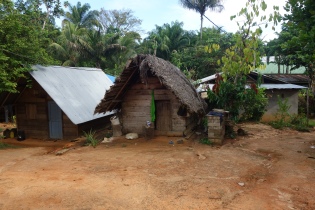 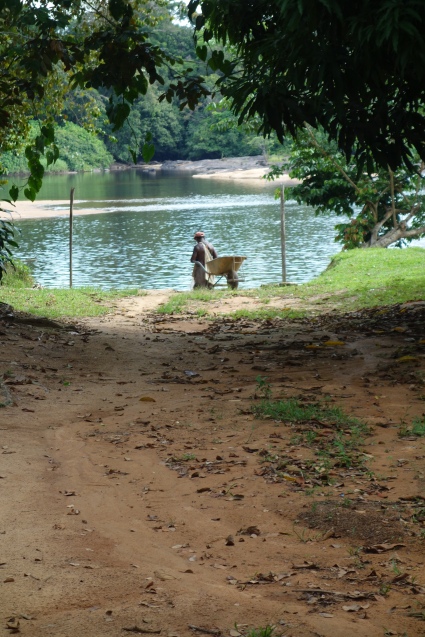 One thought on “Suriname – Parimaribo, Gunsi. The end of the journey.”