Her name was Lola, she was a showgirl
With yellow feathers in her hair and a dress cut down to there…
At the copa (co) Copacabana (Copacabana)
The hottest spot north of Havana
At the copa (co) Copacabana
Music and passion were always the fashion
At the copa they fell in love.
And now that will be in your head all day. You are welcome. It’s been in mine for weeks. And why has it been in my head? Because we’ve been in Rio baby! The place where your heart beats that bit faster, where you are always on the brink of excitement or fear and where people arrive and don’t want to leave.
So where to start. Rio de Janeiro (River of January) a city often mistaken for the capital of Brazil, host of the 2014 world cup and the 2016 Olympics is a giant city by the sea. There are a number of different areas to consider when thinking about where to stay, however the most popular choices are the seafront districts of either Leme, Copacabana or Ipanema (yes there is another song about there too)! We opted for Ipanema and stayed in a great apartment  a block away from the sea front hosted by Hamez and Rocia who showed us round the immediate area and were great hosts. Ipanema is a trendy district . There are nice shops, restaurants out of our price range, bars just about in our price range and of course the beach.
The Beach
I should start with the beach because where else do you have a major city with quite such epic beaches! They are far from the quiet, secluded desert island affair, they are
crazily busy with beautifully tanned sun worshippers, vendors with fixed tents and hawkers selling their wares. As soon as you step onto the beach you are offered deck chairs, umbrellas and Caipirinha’s (no matter what time of day). There are sporadic exercise areas and alongside the road there is a two way bike track that doubles as a running path which I dragged myself along for a bit of morning exercise. The 8.5km of beach in what is called the South Zone is segmented by lifeguard stations known as postas numbered from 1 to 12 incorporating Leme, Copacabana and Ipanama beaches amongst others which helps to identify where you are, just look for the nearest postas and the nearest vendor tent which are also numbered. You can then effectively give your co-ordinates to friends eg post 7 tent 79… Cunning. 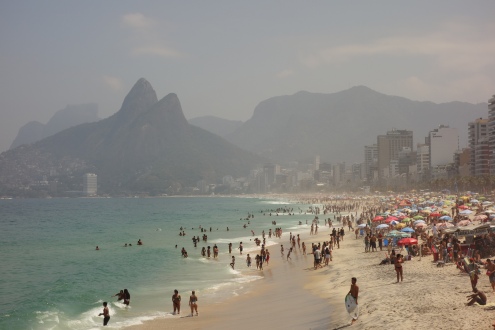 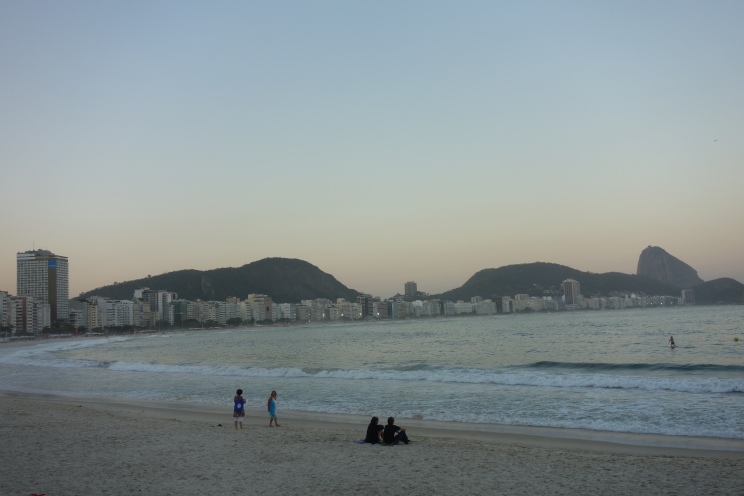 As well as being covered in sunbathers, the beach is also the home of a number of highly competitive games of volley ball, the amazingly skillful foot volleyball and a game that resembled beach bat and ball called frescobal, where the living day lights are hit out of the ball during a volleyed game of tennis. All were taken very seriously with angry disputes taking place over argued points. These Brazilians do not get their perfect bodies by sitting eating ice-cream. Which is unfortunate as if that was the case I’d be a true athlete. 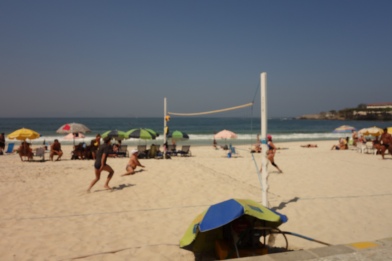 There is a fantastic sunset to be witnessed from the Arpoador rock at the bottom of Ipanema beach. As sunset begins the rock fills with people clambering to find their spot, beer in one hand, camera in the other. From your vantage point on the rock you look across Ipanema beach and watch the sun go down behind Dois Irmãos (Two brothers mountain). It’s pretty special and it is a happy atmosphere on the rock with a round of applause going round once the sun has finally disappeared for the night. 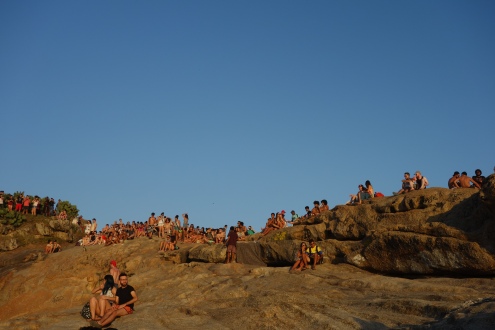 The tourist stuff
When in Rio you obviously have to visit Jesus.  The epitome of all Brazilian postcards, Christ the Redeemer, one of the new seven wonders of the world  has been sitting at the top of Corcovado Mountain (the third highest mountain in Rio) since 1931 following 10 years of construction. He is 30m tall (38m if you count his pedestal) and made of concrete covered in soapstone. I’m not sure what I expected before I arrived but this is one incredibly poplar tourist spot. You can reach it either by funicular railway, or minibus taxis that drive at 1000 miles an hour nearly off the face of the mountain. When you get to the top the views or Rio are spectacular you can see pretty much everywhere there is to see, if you can get past the crowds. There are literally 1000’s of people at the top all wanting their perfect photo, making it a) quite tricky to get a clear shot of Jesus without the heads of the masses and b) slightly pressured in how you get your picture. The whole photographic process is intense, there are matts with cushions on the floor so you can lie down and get your angle. Then there are people in their yoga poses, legs wrapped round their head, one couple who were clearly from the circus had the girl balancing on the guys head in a handstand… whether the Redeemer himself made it into that photo is anyone’s guess. 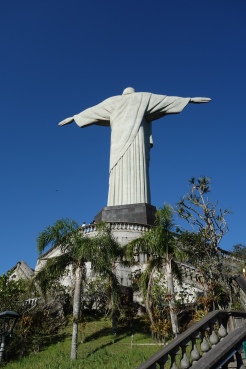 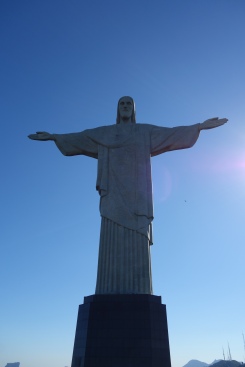 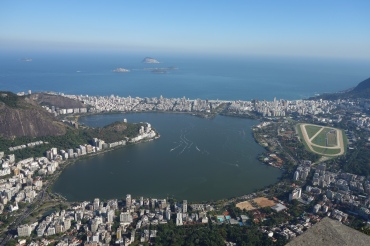 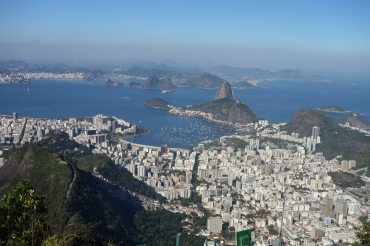 Straight across Corcovado you can see another famous Rio de Janeiro site, Sugar Loaf Mountain. Never tired of views or sunsets we went up by cable car the following evening to see what I can only describe as the winner of all sunsets. Sugar Loaf sits at the mouth of Guanabara Bay giving you a perfect birds eye view of Rio from Copacabana beach round to the airport and looking across to Christ the Redeemer who is lit up at night. As the sun sets the light gradually fades across Rio de Janeiro and bit by bit you watch the lights begin to come on and night descend. The cable gets to Sugar Loaf from the slightly smaller Morro da Urca which also has a short nature trail, a museum about the building of the cable car and they even manage to squeeze in the obligatory Havaianas store… Just sticking with the views they are still pretty spectacular even from this vantage point. 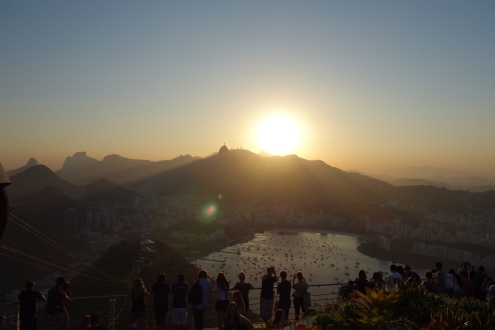 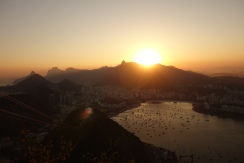 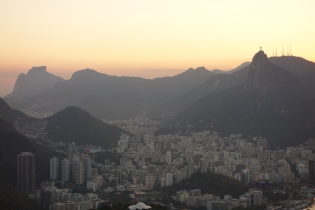 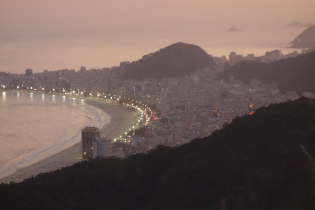 The Lapa district is another area of Rio that is worth a visit. It felt a bit edgier than Ipanema but we didn’t have any trouble there. We visited the Metropolitan Cathedral of Rio de Janeiro, it’s not the prettiest building on the outside although apparently the design is based on the Mayan architectural design for the pyramids. Inside the stained glass windows are truly spectacular. Around the corner from the cathedral are the Lapa Arches, an 18th century aqueduct that is now a bridge for the tram. The main point of interest in Lapa are the Escadaria Selaron, a staircase designed by the artist Jorge Selarón who used to live in a house on the steps. The original staircase was in disrepair and so Selarón began to cover the steps with brightly coloured tiles, gradually building a collection from all over the world. The steps became a constant regeneration project as Selarón continued to replace and change the steps as soon as he was finished. They have subsequently been used in a number of films and music videos including Snoop Dog and Pharrell’s video ‘Beautiful’. Selarón was found dead on the steps in 2013. 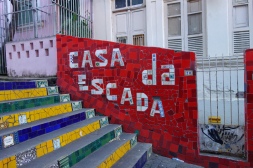 Rio comes with the reputation for a city that knows how to party, particularly during the carnival. It also has its dark side and in a similar way to São Paolo the difference between rich and poor is stark. The favelas surrounding the city are notoriously poor, more noticeably so as the city has grown and become more affluent. However, the people are proud and want to encourage tourists to visit. We met a man from the Rocinha favela who explained that it was actually very safe, that he slept with his door open and they never had any issues. Unfortunately just as we left Rio violence broke out in Rocinha and the military was sent in.
As with every capital or major city, as a visitor you have to be mindful of what you are doing, wearing and carrying. We had no trouble in Rio at all and absolutely revelled in all the city had to offer. However, there have of course been people who have not been so lucky and there are stories of tourists shot after their sat nav sent them in the wrong direction. I would still encourage people to visit but perhaps stick to the metro which is safe rather than attempting to drive (the traffic is crazy anyway) and just make sure you are not wandering around on your own in the wrong area at night.