The good thing about Belem is that you can get to other destinations from it, other than that it was not a city that floated my boat. We flew from Fortaleza to get to Belem as between the two cities there is not a whole lot to see. Information we had read on Belem had suggested a quaint picturesque colonial place but I think that must have been written at the time it was built as it was far from quaint. From what we saw it was pretty grubby with an edgier atmosphere, rubbish piled up on the corners of some streets and a filthy river running through the middle that you would certainly not want to dip your toe in on a hot day in case it dissolved.

I might be getting a bit dramatic, it was certainly my least favourite city in Brazil but it did have some positives. In the main square there is the Theatro da Paz which is a phenomenal building, compete with a wide sweeping entrance and ball rooms. It was completed in 1874 and has some beautiful parts to it. It has two balconies, one with big Roman pillars and a roof, where theatre goers would step out and look over the square at the interval. The second balcony did not have a roof as it was used for smokers and they feared it would burn down! 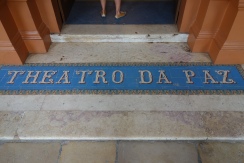 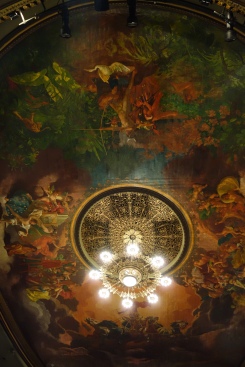 Another area of Belem that is worth a look is Estacao das Docas by the river. This is a large construction that is actually three or four large warehouses that have been knocked through and are now home to restaurants, ice cream parlours and the pièce de résistance, the house musicians that are moved across the room on a platform hanging from the ceiling as they play to the diners below. It is also nice to have a walk outside where the old machinery from the docks is now part of the scenery.

Thirdly, if you are running out of the good old Reals (or indeed cash in general as we were) then you might want to brave the Ver-o-Peso, (see the weight) the huge marketplace on the riverside. It came by its name as it was the former tax house where goods from the Amazon were brought, weighed and taxed accordingly. Today there are hundreds of vendors selling anything from fruit and veg to birds in cages to wicker and knock of sportswear. Inside are a multitude of places of sit down places, all serving the same kind of foods, some recognisable, some not so much. We sat at one lady’s kitchen and ate huge plates of chicken, rice and beans for £2.50. Filling and a bargain and despite the surroundings which did suggest potential salmonella we came out just fine! However, do be aware of certain people within the market, you do need to be vigilant with your belongings.

So maybe Belem was not all that bad after all. There was a good park at the edge of the city that is a breath of fresh air and although the city is not picturesque in the same way that areas of Salvador or Recife were there were certainly some streets worth exploring. However, as I said at the start, the big highlight for Belem and our reason for being there was to get to the surrounding islands like Marajo (Marajó – boats motorbikes and water buffalo) and latterly Cotijuba which I’ll tell you about soon! Cotijuba – The last island