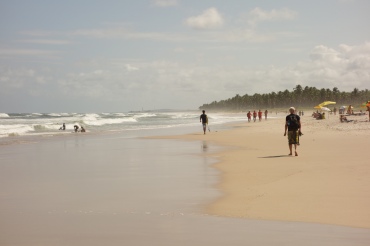 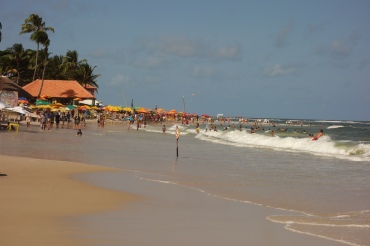 Moving on from Salvador we decided to stop for a few nights at a small place called Prai do Frances, a pleasant enough beach but not really a must go destination. On walking down the beach to find ourselves a quiet spot a lady who had been watching her children stopped us and warned us not to go further as ‘they will see you are gringos and rob you’. And just when I thought I was looking like a local…

Having broken up the journey we continued up to Recife staying in the neighbouring town of Olinda. The further north we’ve come the more traditional the cities seem to be. Recife is a big city with nearly four million inhabitants but as a visitor the main area of interest is the historic centre situated on two islands.  Up until the 1990’s it was a no go area and frequented  by prostitutes and drug addicts rather than tourists. However, significant investment has been made over the years to clean it up and it is now a good place to amble around. The waterfront is lined with restaurants offering relatively cheap lunches where you can look out over to the sculpture garden that is on a strip of land across the water. You can take a boat there too but some of the sculptures are better seen from afar, others are found in the main square of the waterfront. 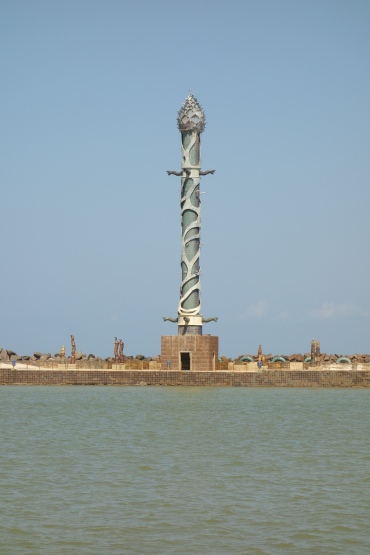 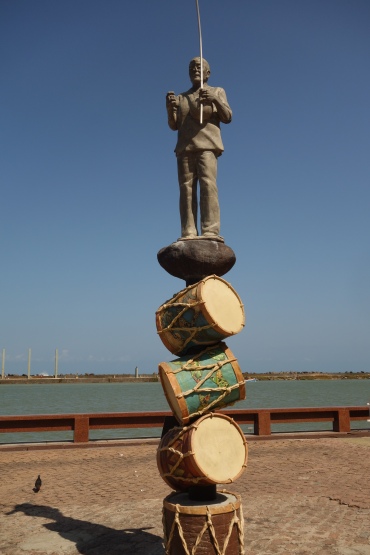 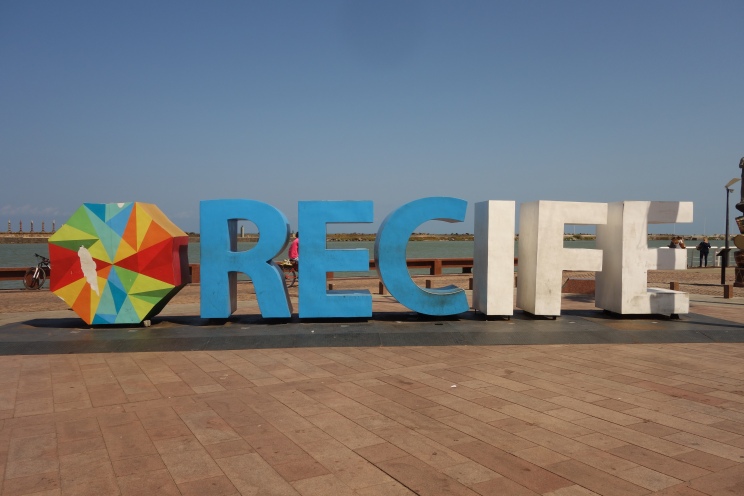 The colonial buildings in Recife are beautiful and in their day would have been exceptional. Efforts have been made to renovate but there are still a large number of dilapidated or well-worn buildings in both Recife and Olinda that reminded us a bit of Havana in Cuba where the glamorous ghosts of the past look out of the broken windows and from behind peeling paint. 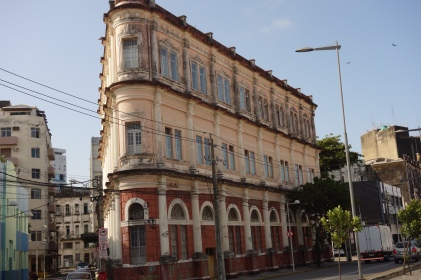 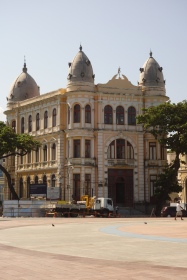 You can spend a good few hours walking around the historic centre of Recife. There is a nineteenth century clock tower that you can climb up for a view of the city, although unfortunately it was closed to visitors when we were there. Instead they had a photographic exhibition in the space downstairs showing pictures of eggs in and on cars… The final straw of that weirdness was the cage of recently hatched chicks as part of the exhibition… Time to leave.

Also on San Antonio island where the majority of the historic centre is located is the stately Praça da República, with the government building at one end and the Teatro de Santa Isabel at the other with other what they call ‘sugar-boom’ buildings in the surrounding area. 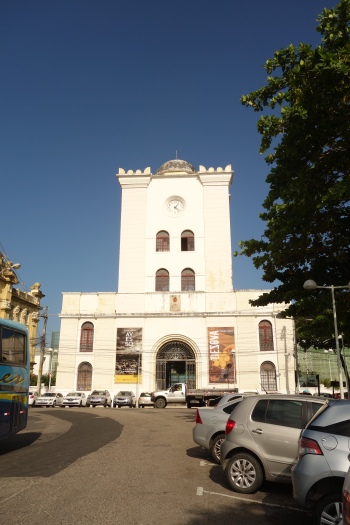 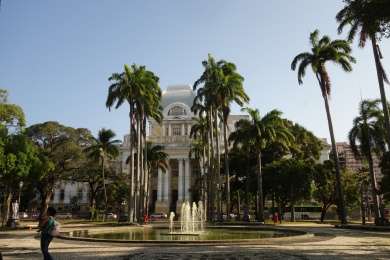 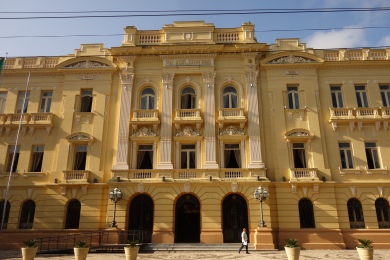 Heading into the main bulk of town it became much livelier and more chaotic. Streets lined with shops selling everything from hair accessories to washing machines with many sellers on microphones to entice you in for the latest bargain. There is a large central market with half dedicated to fabrics, tablecloths, lace etc and the other half all about the food from fish to unidentified pieces of meat.

It is not a tourist city which is refreshing but if you fancy a souvenir or two then prison is where you need to go. OK old prison, converted now into a huge craft market with every old cell now a shop. The inside of the building is incredible and you are in no doubt as to what it used to be. Not somewhere I would want to be left after everyone else had gone home! 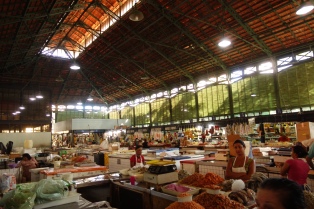 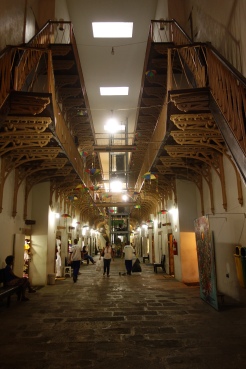 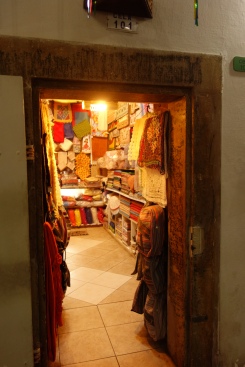 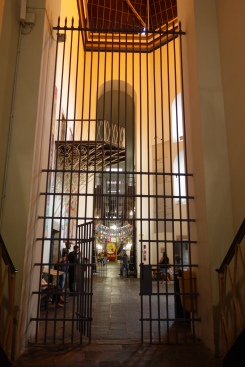 We chose to stay in Olinda rather than Recife because it comes with a better reputation at night and only 20 minutes in an Uber from Recife it was pretty easy to get to. First impressions are that it is a bit run down but then you really start looking and see that it is a town of colour, art, crafts and caipirinhas! We climbed up the Alto da Sé, an area with a number of churches (there is one at every turn in Olinda) but also with a great view of the city of Recife as the sun sets. Alongside many craft and souvenir stalls there were the tapioca and caipirinha stands that we stopped off at for a bit of evening refreshment. Let’s just say they are not shy with the rum. We practically rolled back down the hill! 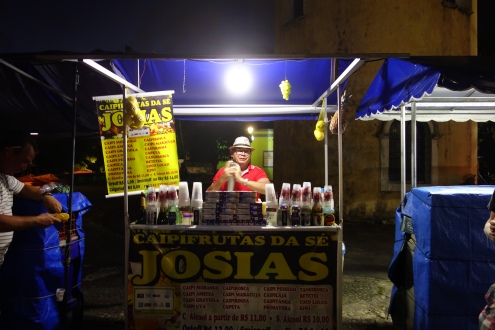 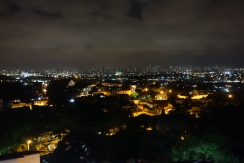 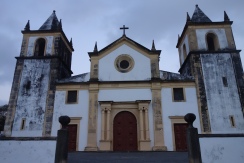 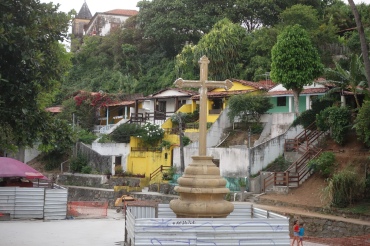 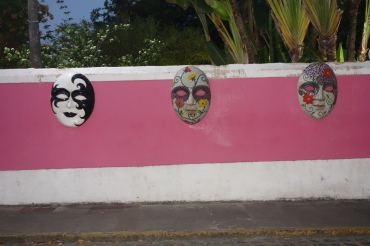 We discovered that the town that had seemed pretty sleepy on our arrival comes alive at night. Hearing carnival music we turned a corner and watched the local dance group consisting of kids of all ages practising. It is no wonder that the carnivals are so spectacular when you watch the practice that goes into it!

The hospitality we have experienced in Brazil has been fantastic, the owners of the pousadas we’ve been staying at have treated us like long lost relatives, hugging us on arrival and waving us off on departure. This was certainly the case in Olinda and another reason that this town, alongside Recife is definitely worth a visit. 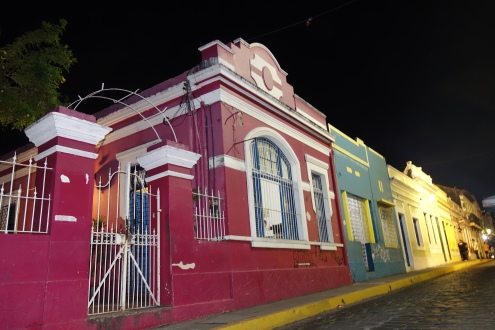 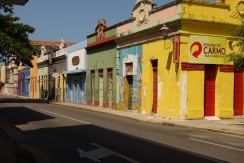 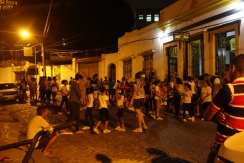 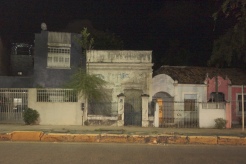 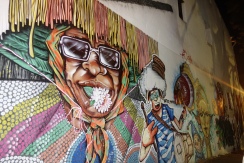 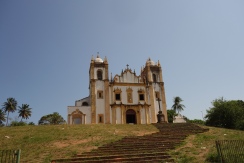