Moving on from the slightly weird, we hit the very brilliant Pipa followed by Jericoacoara (try saying that after a few Caipirinhas…). Both places took some getting to but it was worth every minute.

To get to Pipa we took a bus from Joao Pessoa to Goianinha where we were chucked out unceremoniously on the side of a dual carriageway. With a bit of negotiation we got ourselves a taxi, although once in it we realised that our negotiating was as shameful as the state of the car, which had seen better days. 30 minutes or so later we arrived in Pipa, one of the most famous beaches in Brazil and a very cool little beach town. In fact we liked it so much that we kept on adding another day until we really did have to get a move on and leave.

It’s not like there are a million things to do in Pipa but there are some really beautiful beaches and a main street that is full of restaurants with food from all over the world, the selling point is that it’s just got such a nice buzz to it. The bars near or on the beach are nice to watch the sunset from, one favourite was a beach bar called Orishas made of bamboo with surf boards decorating the walls and ceilings, live music and tables on the beach at sunset. Another called Pipa Beach club was channelling the Ibiza vibe with white furniture, house music and palm trees.

The tides were not to be messed with in Pipa as they came in pretty high so you had to make sure you were in the right place or you would get cut off. One of the most beautiful beaches was Baia dos Golfinhos (Dolphin Bay), a big crescent of a beach surrounded by cliffs  where the dolphins like to come and play. Despite staring at the sea without blinking for three hours we didn’t see as much as a fin. However, as we started to make our way back to the town we saw the dolphins coming in with the tide and enjoying every wave they caught! 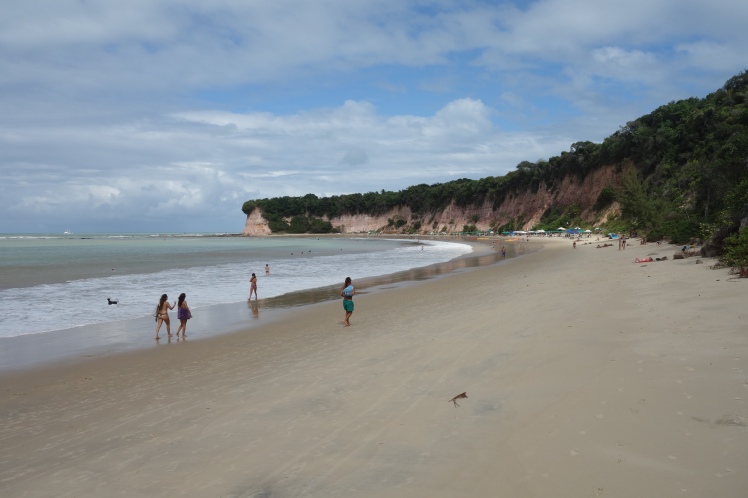 Moving from Pipa to Jericoacora took a fair amount of effort but I highly recommend it. From Pipa we took a three hour bus to Natal and then picked up the nine hour night bus to take us to Fortaleza arriving early in the morning. From there we continued on a five hour bus stopping at a random hotel/castle for some lunch.  Then the real fun began. The bus could only go so far before we were dropped at a petrol station in Jijoca and met by jeeps pulling cattle carts with benches to take us the rest of the 45 minute journey on to Jeri. (NB you can buy your ticket for the jeeps when you buy your bus ticket but if you don’t then there is a ticket office at the petrol station and it cost us 56 real for two people). One final stop was the ‘checkpoint’ for the entrance fee to Jeri which was a bit like a passport control where you had to get out to pay your 20 real each before being let into what is effectively a national park.

Now, the reason that the bus could only go so far is because Jericoacora is a town entirely on sand. Sand streets, sand roads, hotels in sand, you get the picture.  In the same way as Australia’s Fraser Island, the only way to get about is in a four wheel drive so there were jeeps and sun buggies everywhere. It is a great drive into Jeri going through sand dunes and desert and how the driver knew his way is anyone’s guess, it is so easy to become disorientated. The town of Jeri is a busy tourist spot with restaurants lining the sand streets and fresh water lagoons dotted around the place. The tide comes up quite high in the mornings but goes out leaving an expanse of beach throughout the day. It is apparently one of the best places in the world for windsurfing and kite surfing as it is always pretty windy, (which is nice as it is incredibly hot as well) so the sea was always full of surfers of all levels.

The amazing thing about Jeri is that up until the 1990’s, it was a quiet fishing village in the middle of nowhere with no hot water, electricity or any form of TV or internet. It is still in the middle of nowhere but electricity was introduced in the early 2000’s and it was declared an Environmental Protection Area with tourism monitored and the dunes becoming protected from cars etc. However, even now in 2017 street lights are illegal so if you are staying at a pousada off the main strip bring a torch!

One of the ‘to do’ things in the town is to climb Sunset Dune to watch … you guessed it, the sunset… Thinking this would be a good thing to do we followed the crowds to the top of the dune. You will find of course the caipirinha man at the top selling a multitude of drinks although they are considerably more expensive than the man at the bottom of the dune who sells them to you to walk up with! The top of the dune was unbelievably windy.  Looking out to the sea to watch the sun go down we ended up with faces full of sand and completely coated skin! If Jamie hadn’t opened his eyes I wouldn’t have known he was there! The weird thing about this was that as we were experiencing a sand blasting, others were lying serenely taking selfies seemingly untouched by any flying sand so perhaps there is a trick to this that we just didn’t know!

Another destination frequented by visitors to Jeri is Pedra Furada, an arched rock that can be found an hours walk along the beach, you just have to be careful of timing due to the tides.

Similarly to Pipa there is a good feeling to Jeri, there are people from all over the world, it is friendly and lively and again options for all budgets regarding eating drinking and accommodation. Along the main street leading down to the sea the drinks wagons come out after sunset as does the bbq with skewers of chicken or cheese so if you don’t fancy a meal in a restaurant this street food option is good, although (and I don’t know why this still comes as some kind of surprise) the caipirinhas are super strong!!! 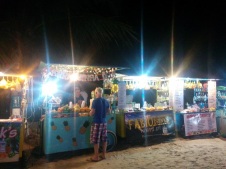