I’ve got a confession. I’m not a thrill seeker. I hold the coats at theme parks, I’ll be the ‘official photographer’ for any vaguely adrenaline fulled activity and I almost always do up my seat belt… The thing is, I’ve given this on the edge living a go and it’s almost always turned into a disaster. For example;  I jumped out of a plane at 14,000 feet which I thought went surprisingly well, until the instructor told me I’d flapped my arms around so much I’d detached the straps holding us together and it was all he could do to keep me attached to him! I went quad biking with friends in Wales and watched my bike tumble to the bottom of a cliff as I held on to some tree roots and pretended to be dead as I was scared of having to pay for it! I fell off a sea kayak and nearly drowned, forgot how to stop when skiing and skied straight into a pylon and got towed to safety by Croatian police whilst going for a gentle canoe.  So it’s not like I haven’t given it my best shot.

Therefore when Jamie was getting excited about the possibility of dune surfing I felt a little bit sick. The best place in Peru for this break neck activity is a town called Ica usefully positioned to break up the 25 hour journey between Cusco and Lima. The first thing to point out to anyone entertaining this activity is that Ica is a dump. After a long uncomfortable night bus we arrived in a town with not a lot going for it. The truth of the matter is that a smaller village called Huacachina which is a 10 minutes tuk tuk ride down the road is where you actually pick up your dune buggy driver and where all the action happens but it is double the price of Ica for accommodation. Trying to salvage our budget we took the economical decision to stay in Ica but literally only used it for sleeping and getting the bus out the next day.

To get up on the sand dunes in a buggy you need to book  a tour. They are all two hours and consist of a dune buggy, the driver, generally about 6-8 other passengers and sand boards. 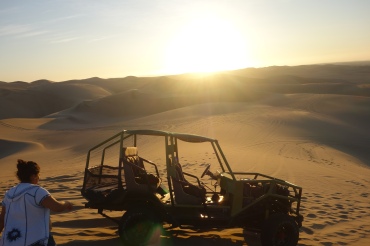 You can get the tours at any time but it is generally recommended towards the end of the day so you can enjoy the sunset over the dunes.  We arranged with our hostel in Ica for our driver to pick us up in Huacachina and we headed over to check out the village and wait for our man. Huacachina was a desert oasis with a lagoon that despite drying up over 30 years ago is now kept filled by local businessmen who want to keep the lake alive for tourists. It is quite a sight, surrounded by sand dunes at 100’s of feet and encircled by bars, restaurants and hostels. 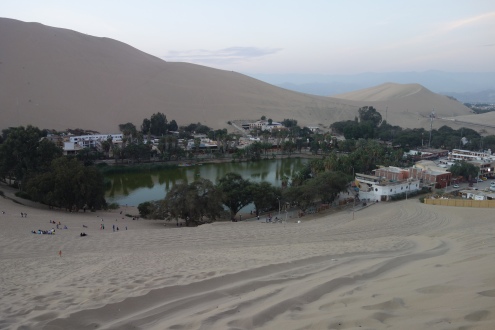 Our driver blew us out. We never did find out what happened to him but because we had waited until the end of the day we had to find a new buggy pretty quickly. This wasn’t the hardest thing in the world as the roads of Huacachina are awash with dune buggies and we found an alternative who once acquiring himself an extra two people set off for the open desert with me firmly strapped in to the front seat and holding on for dear life. (This is while we were still in a traffic jam waiting to get onto the desert).

As soon as we hit the dunes it was each to his own and the drivers all wizzed off in different directions to find somewhere out of the way for their passengers to explore. Our buggy took some warming up and it was a steady climb to the top of the first sand dune and we saw how far the desert really went on for. Then the bottom fell out of my stomach as we got going and we started flying down dunes left right and centre. I screamed my lungs out (yep played it cool from the off) as we hurtled downwards and then back up to the top of the sand dunes with our driver never seemingly aware of whether or not there was another buggy coming in the opposite direction that we would meet head on at the top. It was exhilarating and for all my screaming I didn’t want it to end! 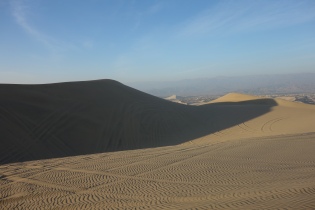 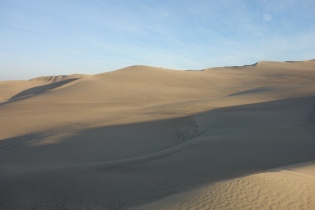 When we did slow down it was sand boarding time. Rather than educating us on sand boarding technique, our driver stood behind and pushed us one by one so we hurtled down the dunes screaming like banshees (me) as we went. However, what goes down must come up and that took a lot longer than getting down there in the first place! Before we knew it we were back to buggy action and thrown around for a bit longer before watching the sun set over the dunes which was pretty special. So for all my initial fear the time just wasn’t long enough,  it was bloody brilliant! 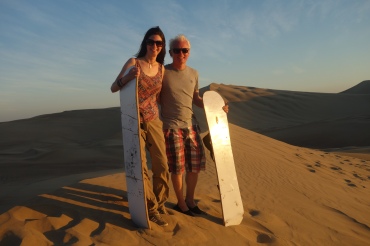